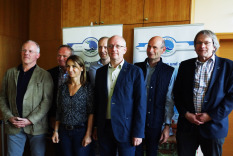 Association of Rügen's regional producers held their annual meeting this year at Naturerbe-Zentrum (Centre of Natural Heritage) in Prora settlement, that is famous for it's high-walk over the treetops.

Actually all previous board members had been re-elected on 09 May 2019 for next three years. 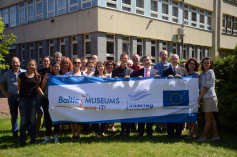 Including a special Seed-money project the preparations, application, clarifications after approval took more than two years. Anyway, the job that did look quite easy when we took it in 2015 year, is done successfully!

Szczecin University as Lead Partner invited organisations from all countries in South Baltic region as well as from Estonia, the Netherlands, and Russia - being financiang Partners, Associated Partners and stakeholders to the project - to Kick-off meeting from 08 to 10 June 2017.

With financial support from Interreg V a South Baltic Programme participants of that project now will create new ICT-based tools and products to deepen valorisation of natural and cultural heritage. 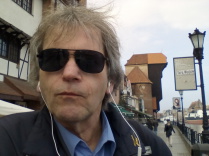 Resulting from successful participation in a public procurement procedure our company was awared by Mecklenburg-Vorpommern Tourist Board with financial management contract for afore mentioned Interreg V a South Baltic project.

As the first reporting period had been shorten to three months only, the first challenge for CEO Ekkehardt Rohkohl was to go in personal contact with all project partners still before the first progress reports needed to be elaborated. And this time it was not only to clarify and agree into the joint rules of engagement in order to guarantee full use of given budgets, but also to discuss the best utilization of the new web-based reporting system in that Programme.

As in previous Programming Period the Interreg South Baltic Programme 2014 - 2020 did approve CEO Ekkehardt Rohkohl as professional expert to support the assessment of project proposals for the current funding period. Once again the Programme authorities do confirm this way his expertise in thematic areas relevant for cross-border cooperation in that region.

Depending on actually required thematic specialisation, availability and - of course - non-collision of interests pool members will be involved into evaluation of submitted applications.

Once again the conference in Berlin at the end of October did demonstrate the wide range of issues to be answered on municipatlity level.

Managing director of itm-consultants gmbh Ekkehardt Rohkohl was e.g. a most welcomed panelist in an unprompted workshop with colleagues from Estonia, Germany, Latvia, and Norway on cross-border integrated urban development. The ICN community also approved his proposal to held a thematic conference in 2016 year on local strategies how to manage cross-border and other international migration processes. 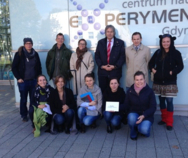 itm-consultants gmbh: Job Potentials of Private-Public-Partnership around museums are partly deployed only

Research about economical results of collaboration between museums or national parks and private enterprises in Baltic Sea Region clearly stated not used potential for employment and growth. itm-consultants gmbh summarized the results of this research in a study presented at BalticMuseums CLUSTERS meeting in Gdynia (PL) on October 8 this year. Indisputably the promising Blue and Green Growth requires creative initiatives from both sides, if the provided natural and cultural resources should be transfered into social and economic benefits, as managing director Ekkehardt Rohkohl pointed out. 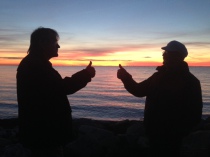 Sunset over Öresund on 9 September 2015 - and Susanne Marx (author of this picture), Dr. Ingolf Sulk and Ekkehardt Rohkohl, managing director of itm-consultants gmbh, had been quite satisfied by the work results of that day.

With the first meeting in the new project, this time hosted by Swedish Malmö Museums, we could step forward with enlargement of the work group. Surely the new approaches like BYOD (Bring Your Own Device) and Gamification have been of help too. It is intended that four weeks later the framework of enlarged project cooperation will be established.

Visiting NaturBornholm in late May

It was almost time tunnel feeling: 1,700 million years backwards in earth history and than step-by-step retour to today's Bornholm - the Danish island neighbouring Rügen only less dozen kilometers away to the north.

Director Peter Haase did introduce the exhibition that makes visitors see and feel our environment - how it became as it is now and also what is behind. Anyway, a lot of overlappings with subjects of the former BalticMuseums community! Subsequently NaturBornholm was invited to accompany their future actions. Managing director Ekkehardt Rohkohl found numerous suggestions how a future collaboration in the museums' network could be enriched.

The third (and probably last) project prolongation did provide the chance to meet at the end of February 2015 in Lithuania's capital  - not to waste time for travelling to the countryside.

Sure, at the project's end everybody remembers lots of very urgent items which are crucial for project success and should have been done ... the day before yesterday at least.

Anyway, seven years of collaboration are a good beginning!

So we invited colleagues from Estonia, from Sweden, and from Lietuvos Žaidimų Kūrėjų Asociacija to join the brain storming on future cooperation with augmented reality.

Because BalticMuseums is not over, we only take a break for a couple of months.

As a special highlight we could have a look on the gone Litas coins and notes at Lietuvos banko Pinigų muziejus.

In real reality we could enjoy the brand-new Lithuanian Euro coins too - very nice ones ... 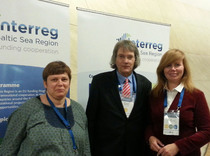 On the occasion of opening the new programming period the "Baltic Sea Region Family" met in the Polish capital on 26 and 27 November 2014.

Representatives of the European Commission, the participating countries, the Managing Authority, and the Joint Secretariat did explain in more detail the main topics of the new programme and the related expectations. From the latest version of Operational Programme already it was known, that valorisation of the macro-region's resources for growth and competitiveness will be placed in the focus more than before.

As often - the "agenda" outside the conference hall was almost even more important than the official part. Romy Sommer (left hand side on picture; animare projectmanagement, Rostock, DE) and Ilze Stabulniece (Manager of the Latvian Office of Euroregion "Country of lakes" located in city of Krāslava) have been among the numerous friends and colleagues to meet.

To summarize the activities up to now and  to electe a new board (according to the statute) IT-Lagune e.V - the regional ICT entrepreneur's association in German Vorpommern region - met on 18th November 2014 in restaurant Braugasthaus "Zum Alten Fritz", Stralsund (DE). Managing director Ekkehardt Rohkohl was re-elected to the board. The other board members are (from left side): Mario Gleichmann; Jenny Kempka (and in the background:) Thomas Lösch and Volker Kruschel.

The annual meeting 2014 of Innovation Circle Network took place in Riga, the capital of the Latvian Republic, on 12 and 13 November 2014.

It was agreed to have a workshop on SME development based on local identity on Rügen island (DE) April 2015.

The next annual meeting will take place in Berlin (DE). 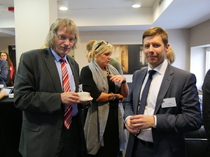 The Final Conference of project "Digital Baltic" - co-financed by the Seed Money Facility of the Swedish Institute - did mainly aim on the opportunities which arise from the Open Data Policy of the European Union favouring innovation, groth and transparent governance. This event took place on 16 October 2014 in Kraków (PL) and also did join good colleagues and friends from previous operations in frame of European Territorial Cooperation Objective (on the photo Paul Nemes from Swedish Värmland County Council together with managing director Ekkehardt Rohkohl, in the background Eva Lundin from Norwegian Hedmark County, photographer: Katarina Nordmark from Värmland too).

During the proceedings as well as informally in the coffee break the participants did agree that internatioal cooperation would be the most efficient way to answer the various challenging questions of Open Data Policy implementation. 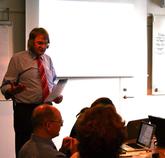 Since the draft programmes had been published it was to analyse which access points are offered and how the community - today consisting of partners from Germany, Lithuania, Poland, Russia and Sweden - could benefit from.

Already now the partners did agree to continue their trustful collaboration that did grow over the last six years and provided valuable solutions for common challenges.

At Lithuanian Sea Museum (Ljm) an eGuide Lab was held on 27 June 2014 to disseminate the results of “BalticMuseums 2.0 Plus” project to stakeholders and interested organisations. Also Susanne Ekblad (on the left in the photo), representing the new partner Swedish National Maritime Museums - Naval Museum, was eager to learn about the joint content development for multimedia and multilingual eGuides presented by Jurgita Eglinskienė, the project manager at Ljm. A quite broad attendance from regional and national institutions to that event did prove once again the relevance of advanced ICT support for nowadays’ perception of natural and cultural heritage.

The South-Baltic Co-operation Programme did grant an extension stage until the end of 2014 year to the project, so instruments as such eGuide Labs could deepen the impact of project outcomes in the Programme area. 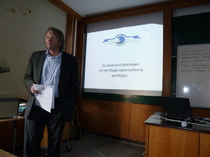 May regional products contribute to income, employment, and groth? Rügen island – well known in DACH – is unique but experiences collected by Rügen Produkte Verein e.V. are asked by stakeholders from other regions as well. The evening event of Michael-Succow-Foundation *) on 29 April 2014 in Greifswald was focussed on what other regions could learn from Rügen and which mistakes to avoid.

The NGO Rügen Produkte Verein was founded in 1996 for joint marketing of regional products; since 2002 Ekkehardt Rohkohl is a member of its board.

„BalticMuseums 2.0 Plus“ Project at European Parliament

Invited by MEP Radvilė Morkūnaitė-Mikulėnienė (Tėvynės sąjunga - Lietuvos krikščionys demokratai) approaches and findings of the BalticMuseums community have been presented  on 19 March 2014 during a Lunch Briefing at the European Parliament. With parliamentarians, Commission officers, and other stakeholders discussed the project activists prospects of dissemination of project outcomes as well as opportunities to continues and maybe enlarge the co-operation.

Since year 2008 already oceanogaphic museums and researchers from Germany, Lithuania, Poland, Russia  - and now also from Sweden - jointly work on improving the attractiveness of museums by various ICT tools. Theproject in frame of South Baltic Co-operation Programme 2007 - 2013 is part-financed by the European Regional Development Fund.

At Stralsund University of Applied Sciences Prof. Dr. Michael Klotz did welcome representatives of organisations from Denmark, Germany, Poland, and Russia on 3 April 2014. A project was launched that aims on the establishment of a sustainable co-operations in order to promote the transfere of know-how and experiences in favour of emerging ICT entrepreneurs. To support the implementation of the EU Strategie for the Baltic Sea Region a Seed Money Facility was created. It shall help to ensemble capable partnerships and to design fruitful projects.